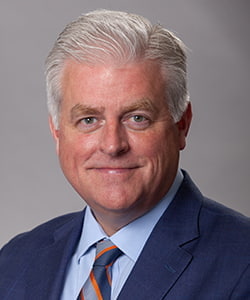 Doug Mahoney, a founding partner of Robinson Mahoney PLLC, is a trial lawyer who really enjoys trials. He has more than 50 jury verdicts which span the breadth of personal injury law. He has participated in five trials which resulted in jury verdicts in excess of one million dollars. Three of those multi-million dollar verdicts are specifically described below, not because of the amount of the verdict, but because of the importance of the message the jury sent. It is hoped that these three verdicts will result in others not being harmed in a similar fashion.

In Tim Doe v. St. Francis Hospital, Doug represented a man who had been sexually abused approximately forty years earlier by Dr. George Reardon, a physician at St. Francis Hospital. Doug sued the Hospital alleging two things. First it was alleged that the Hospital was negligent in its supervision of Dr. Reardon. Secondly, it was alleged that the Hospital failed to protect Tim from Dr. Reardon while he was in its care. The jury found in Tim’s favor on both counts and awarded him a $2.75 million dollar verdict. The Hospital took an appeal and the Supreme Court agreed with the jury. It is the first time Connecticut courts recognized the duty of institutions to protect children in their care.

In the Estate of Blackwell v. Town of Seymour, Doug represented Matt Blackwell who was out one night with three of his friends drinking at a local bar. Also at the bar was a local police officer. The officer knew that the driver of Matt’s car was intoxicated. Instead of stopping him from driving, he gave him a “get out of jail card” that he could present to an officer if he got pulled over. Shortly after leaving the bar, there was a one car accident. Three of the young men were killed and one was left as an amputee. Attorney Mahoney served as lead counsel at trial for all four men, assisted by two other law firms. The jury returned a verdict totaling over $16 million dollars for the four men with over $6 million as to the Town of Seymour. It is believed to be the first time in Connecticut that a jury held a town responsible for the conduct of an off-duty police officer.

In John Doe v. Boys and Girls Village, Attorneys Robinson and Mahoney represented a boy who was sexually abused by his former teacher. The boy’s mom reported to the boy’s therapist that she suspected that the woman was having sex with her son. Under Connecticut law the therapist is a “mandated reporter” and has a duty to report suspected sexual abuse of a minor. He and his boss, a psychiatrist, chose not to believe the mom and did not report which allowed the abuse to continue for another year. Attorneys Robinson and Mahoney filed suit and the jury returned a verdict for the boy in the amount of $1.2 million dollar verdict. It is believed to be the only verdict ever in Connecticut for the failure to report suspected child abuse.

Doug received his J.D. with Honors from the University of Connecticut School of Law and his A.B. from the College of the Holy Cross. Other distinctions include:

A.B., College of the Holy Cross

Contact Us
Personal Injury
Client Reviews
★★★★★
"You helped our family through such a most difficult time and we will always be grateful for the kindness and the very professional way you handled our case. Thinking often of you.” L.M.
★★★★★
“Words have failed us, so a thank you from the depths of our souls will give us a start. Your classic, dignified , adult presentation of the facts was stunning. (It was) astonishingly evident that you were in complete control all the time… We will remember you always with the utmost respect.” Mr. and Mrs. D
★★★★★
“I wanted to thank you so very much for all you have done for me. I think I’m still in shock! You’ll never know how much this verdict has helped me. I don’t fear the future as I did before. Thank you so much again-from the bottom of my heart!!!” P.D.
View More
Submit a Law Firm Client Review