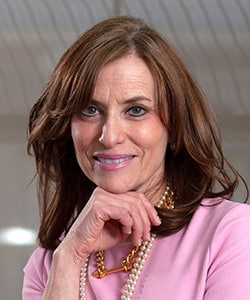 Cindy Robinson is a founding partner of Robinson Mahoney PLLC. Starting in law school and throughout her legal career, Cindy has focused on representing people whose lives have been affected by physical and emotional injuries suffered in car collisions, slips and falls, due to medical negligence and families who have lost a loved one in wrongful death actions. In the early 1990s, Cindy became one of the first attorneys in the state to represent adults harmed by childhood clergy sexual abuse. Since then, Cindy has devoted a large part of her practice representing individuals victimized by child sex abuse often by people in positions of trust.

In addition to her trial practice, Cindy is a member of the Board of Governors of the Connecticut Trial Lawyers Association where she is Co-Chairperson of the Nominating Committee, a member of the Continuing Legal Education Committee and an officer. For the past 29 years, Cindy has been a member of the Standing Committee on Recommendations for Admission to the Bar in Fairfield County, which evaluates and reports on the character and fitness of attorneys.

Cindy has been recognized by the following associations and organizations:

Appointed by the Judiciary to the Standing Committee on Recommendations for Admission to the Bar in Fairfield County
Member Since: 1992 to Present

Appointed by the Judiciary to the Federal Grievance Committee
Member Since: 2016 to Present

Honors and Awards
Contact Us
Personal Injury
Client Reviews
★★★★★
"You helped our family through such a most difficult time and we will always be grateful for the kindness and the very professional way you handled our case. Thinking often of you.” L.M.
★★★★★
“Words have failed us, so a thank you from the depths of our souls will give us a start. Your classic, dignified , adult presentation of the facts was stunning. (It was) astonishingly evident that you were in complete control all the time… We will remember you always with the utmost respect.” Mr. and Mrs. D
★★★★★
“I wanted to thank you so very much for all you have done for me. I think I’m still in shock! You’ll never know how much this verdict has helped me. I don’t fear the future as I did before. Thank you so much again-from the bottom of my heart!!!” P.D.
View More
Submit a Law Firm Client Review